After I posted some of my observations about flaws in web 2.0, I received a lot of positive and smart reactions. Becoming a bit overconfident I suggested that we might be able to aid future service design by exploring with more people how to move on to the next level of social interaction. I called them Open Social Interaction Networks (for lack of a better name, any takers?) where the value for the user is central in design, not the value of the network which has been the most important monetizing scheme in almost all current social networks such as Facebook or MySpace.

Since I asked for it I might as well start up the discussion by looking at perhaps the most important aspect of such services, the needs of the people using them. Rolf Skyberg wrote a really excellent presentation on this and took Maslov’s Hierarchy of needs as the basis to explain, that the market puts safety, prosperity and socialisation first.

I would like to look at it from another perspective and see what we can distill when we look at the behavior now on the Internet. It occured to me that there are many opposing beliefs. Some feels the social network is defined by the value and size of the network, while others looks more at quality. Some want their interaction to be public and stretched to the limit of what a human could possibly cope with (See Robert Scoble wanting to handle more than 5000 Twitter and 5000 Facebook relations. That is pretty amazing to me), while others will only be interested in a few qualitative friends. Some feel the network is the value, but it lacks ways to leverage it, others think that separating content form people will do the trick. There are people out there creating content like crazy, while others only consume it. Some want to gain celebrity status while others like being anonymous.

Lets see where this gets us. If I would draw two axes with a few of these parameters and look at what seems to be important to the user, I get: 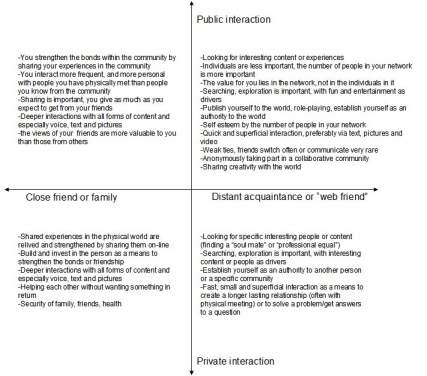 I’m not in any way pretending to be complete, but it does provide some insight in that people will act differently under different circumstances and in different communities. We might aim to support just one type of interaction in a specific community, and design the possible interactions only for that specific community. But, as we are looking at an improvement for web 2.0, we would also need to look at the boundaries and unification of these interactions. It would need open networks and possibilities to use them privately as well as public.

For me, the following items might be important to a user (not complete I am sure!):

Got to stop here as the story is becoming too long already. Let’s hear what you have to say on this. More to come in the next weeks on supporting such needs with tools and technology, and possible monetizing schemes.